Crossing the Sound is a collaboration between poet Gerald Dawe and the artist Padraic Reaney. They met back in the mid 1970s in Galway where Gerald had moved from Belfast to study at UCG, as it then was, and eventually settle down and spend the next twenty years before moving to Dublin in 1992.

Gerald: ‘On a return to Galway as a visiting fellow at The Moore Institute (NUI,G) the early years returned to me along with some new poems. During several conversations with Padraic we decided to collect a representative sample of the poems I had written out of the west – Galway, but also Mayo – and include alongside these thirty poems, a series of images which Padraic had been working on from his various and long-established fascination with the smaller islands of the western seaboard, including Inishark. We will publish a volume of the poems and Padraic’s images, images which do not illustrate the poems, but have their own raison d’être culminating in an exhibition of his paintings and graphics in the Kenny Art Gallery, Galway on 12 October 2018.’ 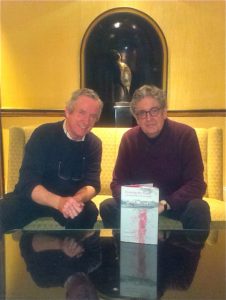 “Crossing the Sound”, a collaboration between poet Gerald Dawe and the artist Padraic Reaney, will be launching in Achill at the Heinrich Boll weekend on Achill and in Westport later this summer, in aid of Mayo cancer charity, Pink Ribbon.

“Crossing the Sound” will be launched in Achill at the Heinrich Boll weekend in the Cyril Gray Hall, Dugort, Achill Island on May 3rd at 3.00pm. A further launch will take place in Westport in June.

The book, a limited edition of just two hundred copies, features poems written over forty years by distinguished poet Gerald Dawe, alongside the Connemara-based artist, Padraic Reaney. It celebrates and illuminates the beauty and history of the west of Ireland landscape through a curated selection of work inspired by and connected to the region and introduced by Hugo Hamilton.

Dawe and Reaney met in the mid-1970s in Galway, where Gerald had moved from Belfast to study at UCG, as it then was, and eventually settle down and spend the next twenty years before moving to Dublin. ‘This is a project we’ve been talking about for years. We’re delighted to see it finally in place in such as beautiful edition. It’s an apt way of offering a helping hand to the Pink Ribbon Charity in Mayo. Finding ways of overcoming cancer is the big picture; this is just a small step.’