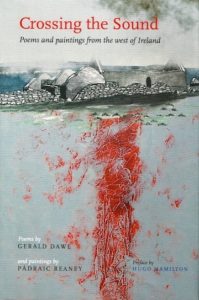 Crossing the Sound is a collaboration between poet Gerald Dawe and the artist Padraic Reaney. They met back in the mid 1970s in Galway where Gerald had moved from Belfast to study at UCG, as it then was, and eventually settle down before moving to Dublin in 1992. ‘On a return to Galway the early years returned to me along with some new poems and during several conversations with Padraic we decided to collect a representative sample of the poems I had written out of the west – Galway, but also Mayo – and include alongside the poems, a series of images which Padraic had been working on from his various and long-established fascination with the smaller islands of the western seaboard, including Inishark’. Padraic’s images, some of

which will be on display during the Böll weekend, feature in an exhibition of his paintings and graphics scheduled for Kenny Art Gallery, Galway on 12 October 2018. The highly regarded novelist, Hugo Hamilton has contributed a preface to Crossing the Sound. Gerald Dawe is a distinguished poet with over twenty books published since 1978. He was professor of English and Fellow of Trinity College Dublin until his retirement in 2017. Padraic Reaney is one of Ireland’s most distinctive visual artists. His paintings are in numerous individual and institutional collections and art galleries throughout Ireland, Europe and the US. He lives in his native County Galway. All profits from the sales of Crossing the Sound will be donated to Mayo-based cancer charity, Pink Ribbon.

Pádraic Reaney was born in Carraroe, Co. Galway in 1952. He studied Fine Art at Galway, Regional Technical College encouraged by the sculptor Oisín Kelly and has been a full-time artist since leaving college. He painted for several years in Galway; later he built a studio in Moycullen, where he now lives and works. He has exhibited extensively in Ireland, Scotland and Wales and his work is in public and private collections in Ireland as well as in Europe, Canada, USA, Brazil, Japan, South Africa and Australia. His work is held in collections such as the Modern Irish Art Collection; Dublin Writers Museum, Ireland; Irish Embassy, London; Ireland’s Great Hunger Museum, Quinnipiac University, USA; Siena Art Institute, Italy; Urawa Wood-Cut Prints Association, Japan.