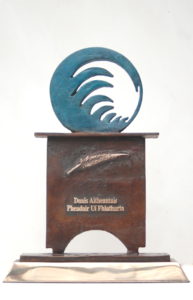 The shortlist for Gradam Sheosaimh Uí Ógartaigh was officially announced by the Mayor of the City of Galway, Cllr. Pearce Flannery at a press event in Téatar Uí Chearbhalláin, Áras na Gaeilge, NUI Galway.

Peadar was the first Cathaoirleach and founding member of Gaillimh le Gaeilge and he laid down the foundation for the growth and success of the organisation.

“Bord Stiúrtha Gaillimh le Gaeilge are proud to commemorate Peadar here today and the time he generously spent with us in Gaillimh le Gaeilge.“He was a deep thinker, with foresight who always had a long term goal in mind. He steered the organisation prudently and was always a loyal friend.” 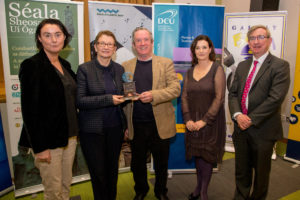 A beautiful piece of sculpture was especially designed by the renowned artist Pádraic Reaney, a good friend of Peadar. It will be presented to a person or an organisation who have made a great effort to use the Irish language but who are not primarily involved with the work of Gaillimg le Gaeilge or indeed Gradam Sheosaimh Uí Ógartaigh.